Lost is an American television drama series that originally aired on the American Broadcasting Company (ABC) from September 22, 2004, to May 23, 2010, over six seasons, comprising a total of 121 episodes, created by J. J. Abrams, Damon Lindelof and Jeffrey Lieber.
I was captivated since the first episode.
The music was composed by Michael Giacchino, incorporating many recurring themes for subjects, such as events, locations, and characters like “Life and Death” that we can hear in many episodes. The melody is really simple and relaxing. This piece is easy to play even for beginners.

Nothing Else Matters by Metallica was one of my first videos uploaded on Youtube in 2009. Failing to play the ear, I bought the music sheet arranged by Scott D. Davis. It took me weeks just to learn the intro and I could not play the first verse or the chorus. That’s why I looked for a piano teacher. I posted the video on Youtube to show my level to my future teacher.
And then I never played that song until recently. I had to relearn everything from scratch. But this time I get to play the verses. I especially wanted to see if since 2009, I learned a bit faster and if I had made progress.

In the intro, I could actually learn it in no time and without difficulty. As for the verse where I blocked, I finally got it with a little bit of work.
There is also a huge step forward in terms of recording quality. But the big difference lies in the interpretation. And that, I owe to my husband who taught me to listen to music differently.
And comparing the 2009 version to the 2014 version, I am aware that a false note goes unnoticed if the interpretation is good, but by-against misplaced intonation or a cut to the rhythm (hesitation) is more disturbing.

You Are Not Alone is a Michael Jackson song released on the album HIStory on June 20, 1995, and released as a single on August 15 of the same year.

This was the first and only single to make his first appearance directly at number 1 of the Billboard Hot 100.

R. Kelly would have written the song after the loss of loved ones.

On 4 September 2007, the Brussels Court of Appeal finally ruled that this song was a plagiarism of a work written in 1993 by the twin brothers Danny and Eddy van Passel entitled if we can start all over. According to this same judgment, all copyright wrongly paid to R. Kelly will have to be returned to van Passel. Since this judgment (only recognized in Belgium), the song is banned from Belgian radio and television

Below you will find 2 different tutorials. There is a 3-part tutorial that explains in detail how to play the song and another tutorial in which I made a quick explanation of the method I use to play ear

As on the one hand I was asked if I could do a tutorial on this piece and on the other hand, a lot of people think that playing by ear is difficult, it needs to be gifted, which it’s not the case, I wanted to make a live video of my procedure.
I had not played this song for a very long time and I had completely forgotten it. I had to look for melody notes and left-hand chords. So I turned on my webcam and started analyzing the song. I tried to say loudly what was going on in my head but it’s not obvious at all. Worse, I quote notes and I play others.

I hesitated for a long time between publishing this video or remake another one more pro. And finally I say to myself that a well-crafted video would bring nothing more, but against the Reality TV side of my first catch more reflects my way of doing things and my ideas sometimes a bit confusing. My goal is not to teach a course to learn to play ear, but rather to show how I do.
This is a start for those who would like to play by ear but also for the most experts who can give me their advice so that I can continue to progress.

Once again, the purpose of this video is to show you how it’s easy and fast to play a song by ear once you know some tips and tricks. (you will find these tricks and tips in the “play by ear” part of my blog. 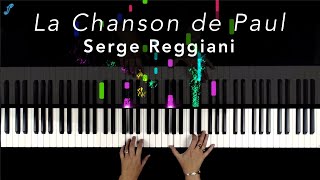